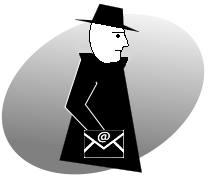 This is part four of a six part series. In this part we will cover the Email Server(s).

In this post: I discuss the criteria for choosing your email server(s) and then link to the Wikipedia email server comparison table, where you can find email servers that match your criteria.

There may be up to three different email server programs, possibly on separate servers, or they may all be combined in one software. They are:

This diagram is the most complex part of the post - don't let it scare you: 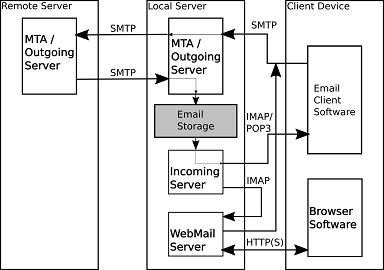 Things to note about the diagram:

I put the criteria roughly in the order I think of as most relevant and important, not the order they appear in the Wikipedia comparison.

If you have a panel, like Plesk or cPanel, then I recommend using their defaults: their choice is usually pretty flexible and you will get better support. Personally I have Plesk on Linux and use the defaults: Postfix for outgoing, Courier for incoming, and Horde for WebMail.

Not much to say, really: you probably already have your operating system. Linux is free. Windows will cost. Linux has the largest market share for Email Servers. MacOS the smallest. Almost all that support MacOS support Linux, too, since they're both Unix derivatives and Linux has the larger market.

WebMail is the simplest to separate out: there are specialized WebMail server programs that do nothing else and only need IMAP and SMTP access to work. I would not make it a criteria that WebMail be integrated with my other servers. Note also that the Wikipedia comparison list excludes WebMail only servers.

Your incoming and outgoing server can be independent, but if they are, you will still need them to access common storage and want them to access a common set of usernames/passwords, so in that case, pay attention to the storage and the authentication storage options: filesystem, database, LDAP, other.

Earlier people used to always retrieve their email and delete it from the server - space on the server was expensive and you had one computer. That is the POP3 model. Nowadays, server space is cheap and people want to read their email on their mobile, their tablet and their laptop, so the email needs to be on the server to be accessible. This is the IMAP model. For general customers I recommend supporting both - there are some old-school folk still around. If you have to drop one, drop POP3. Separate IMAP and POP3 servers are not practical.

Unless you're doing an in-house mail system in a local network, secure connections are an absolute must, both for outgoing and incoming. The SSL feature is straightforward: it means the supported protocols appear on their alternate SSL ports, often signified by appending an "S" to the protocol name (SMTPS on port 587, IMAPS on port 993, POP3S on port 995). The "Opportunistic TLS" options (also called STARTTLS), SMTP over TLS and POP over TLS mean that a plain text connection is made over the old lower port number, and then the connection is upgraded to a secure connection. Some people prefer the former, so that no meta-data can be caught by eavesdroppers. Some prefer the latter, so that fewer ports are used. Most servers I've seen support both, letting the client decide.

Authentication means asking for username/password, and is an absolute must. Whether or not encrypted passwords are supported doesn't seem to be in the Wikipedia comparison, probably because with an encrypted connection, password encryption is now unimportant.

SMTP Authentication is in the list: there are servers that allow sending of emails without asking for a username and password at all, even though that is very likely to get your server blacklisted these days.

If you're using separate ingoing and outgoing servers, be sure they can use the same authentication database (Filesystem/Database/LDAP).

I would ignore "POP before SMTP" - it is almost never used anymore. I would also ignore APOP, a specialized form of encrypted authentication for POP3 that is not relevant for most with the rise of MAPI.

The storage system for incoming and outgoing must be compatible. A given if you're only using one program for both, but needs to be checked if you're splitting it up.

This may also be relevant to your backup system or to your personal preferences: some old school programmers may like to see actual files they can edit with a text editor; a database specialist might like to be able to mangle things with SQL.

New software tends to be buggy, so mature is good. It's not on the comparison list, so I would google the software that makes it to the final rounds. I would only go "bleeding edge" with email that I don't care about.

I think that IPv6 support is a good indicator of how actively the project is being developed. Support of IPv6 is usually not important yet, but it will be, and so a software that does support it is forward looking. I would, again, google to verify in the final rounds.

I could do a whole series on antispam features. That said, for small operations I don't think they're a killer criterion - I receive spam, my email client mostly sorts it into the spam bin. It's not been a problem for me so far. If you're customers are not tech-savvy, you may want one with integrated antivirus.

Take your time and compare.

Most of them are free, so if you're having trouble deciding, you can do a temporary install to test it out.

Do not forget the SSL Certificate!

Your package will generally have instructions on how to set the certificate to be used. Just don't forget it, otherwise your users will get nasty messages and may not be able to use your server at all.

Special note for Plesk users: Plesk will automatically use the default certificate for the email server. Plesk has documentation on how to bypass this if you need to.

We're almost there! You should have a working email server now. All that's left is to set it up so that email clients can find the proper settings more easily - which is a lot more complicated than it should be, in my opinion.

This is part five of a six part series. In this part we will cover setting up Autoconfiguration for…